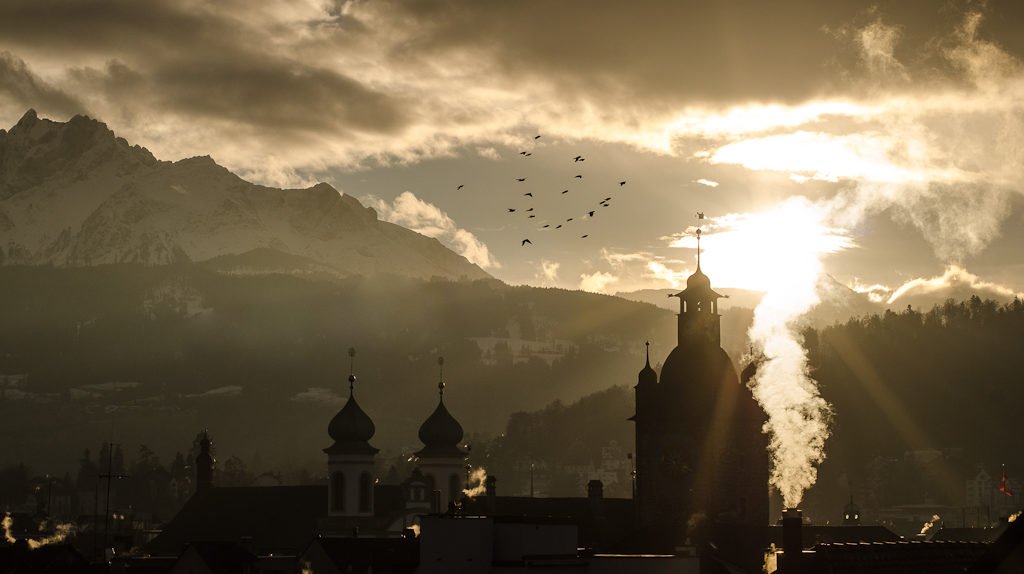 In between the end of the semester at the University of Edinburgh, and the start of the final leg of production for The Final Straw, I decided to pay a visit to my dear friend and amazing violinist, Sojin. No white Christmas here, but it was plenty cold, and the views of the Swiss Alps surrounding Luzern were too much for me to take in — I almost didn’t want to take photographs, in fact I spent the majority of my time sitting there and enjoying the views as a camera-less observer… with the exception of the few photos below. Enjoy.

Supposedly it really isn’t this nice in Luzern during this time of year, ever. Although the occasional rain hit, we mostly had a lucky week of partly-cloudy skies and rather warm (40-50 F) temperatures.

The relatively famous wooden Chapel Bridge (kapellbrücke) which spans across the Reuss River.

Suhee Kang, the illustrious Assistant Director for The Final Straw documentary, has actually been here before, twice! She sent me a note to pick her up some tea from this cute little shop in Luzern, The Queen Camellia Tea House.

Lest you think I was living in the lap of luxury this week… being on a pretty strict budget this Christmas is one of the main reasons that I could not return home to the U.S.A. for the holidays. It also meant that dining out was mostly out of the question in this absurdly expensive little town of Luzern. Luckily I learned how to make a pretty solid sandwich several years ago during my short stint as a sandwich maker at Togos in Los Gatos, CA.

So, here we are, a random kind of (inexpensive) meat I picked up at the local grocery, and some equally random and inexpensive cheese. This — along with rice, since I was staying with two Koreans — was a staple of my diet for the week.

Next, it’s on to Korea via Italy — for some reason, the cheapest flights to Korea ($550 on Air Turkey) seemed to be out of Milan.