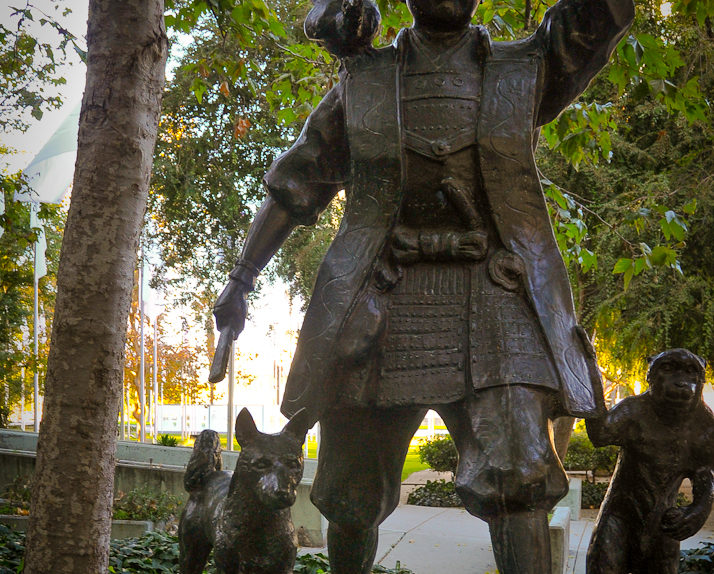 Several years ago in my hometown of San Jose, California, I came upon a curious statue along the Guadalupe Creek, behind a huge performing arts center, and further tucked away under a maple tree. This statue was one of my first encounters with any kind of Japanese culture in my hometown, before my first trip there with friend Kohei Mizushima, and before my interactions with our city’s San Jose / Okayama Sister Cityorganization.

The curious statue – a young boy, a dog, a pheasant, and a monkey – was donated by the city of Okayama, our ‘sister city’ in Japan, and was fronted with a plaque explaining the legend behind the boy, who was named Momotaro, or ‘Little Peach Boy.’As the story goes, Momotaro was born to childless parents from inside a peach – yup, that’s how Japanese fairy tales roll, the woman opens a peach and bam, there’s a kid inside.

As he grows older, Momotaro is tasked with a mission to rid an island of some ogres who are, you know, doing the kinds of bad mean things that ogres tend to do. So he sets off with his sword – a Hattori Hanzo, perhaps – and three animal friends: a dog, a phesant, and a monkey.

The four head for the island, some epic city-boy-quest-to-island type events ensue, and eventually they do away with the ogres and head back to Okayama.

So what on earth does this have to do with me beside the fact that it is a neat story?

I’ve recently been speaking with a few wonderful artists and professors from Aichi Prefectural University of Art and Music in Japan about having the Final Straw documentary premiere at the Setouchi Triennale this summer – a festival which takes place on several islands near Okayama.

Nothing is certain yet, but the really interesting thing if it all works out, is that the island we would be exhibiting on is none other than Megijima, the island that Momotaro traveled to battle the ogres on.

On a personal level, it is a really interesting coincidence which goes back to the very root of my first encounter with Japanese culture in my hometown… and now links to an amazing project which I’ve dedicated much of my time to in the past year.

For more on the project, visit the Final Straw Mini-site.