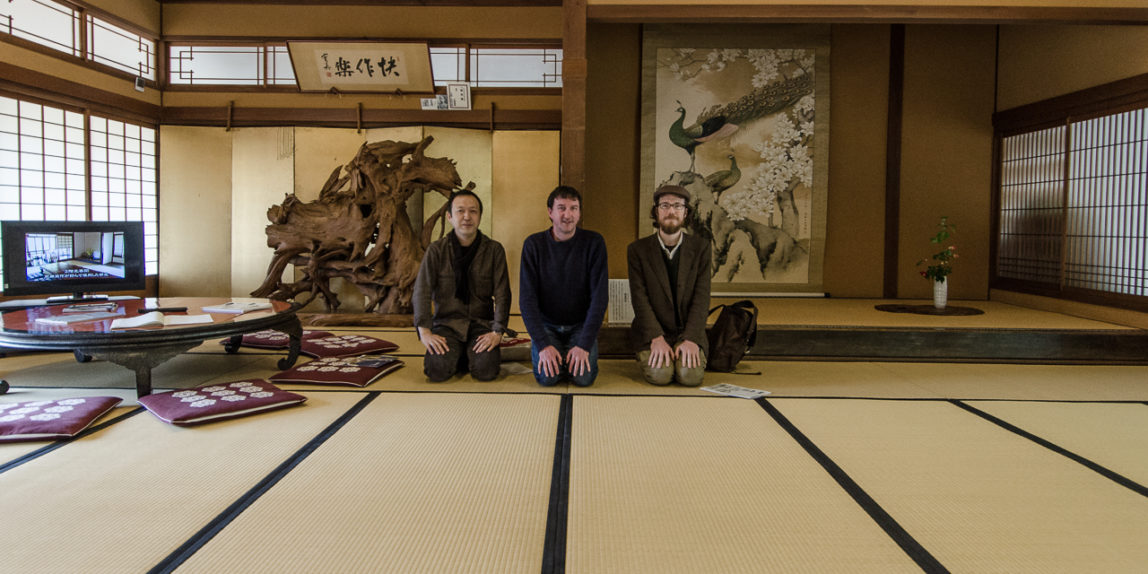 My tutor from University of Edinburgh traveled to Japan a few weeks back and I was fortunate to join him on a week-long tour of art, space and nature goodness. We went from the hills of Yamaguchi and Akiyoshida, to Aichi University of the Arts in Nagoya, visited a lush mountain farm called Fukuzu, and also had a visit to Megijima Island with Isao Suizu and Ikumasa Hayashi to talk with the locals about a project I will be involved in this summer — more on the Megijima project in a separate post.

There was a quick meet and greet and tour of Akiyoshidai International Artists’ Village, a beautiful facility that seemed more than a little under-utilized. Perhaps we came at a slow time of year, but it would be great to see this place, tucked beside the limestone hills, to be an active space for re-connection with art, humanity, and the natural environment.

Also in and around Yamaguchi, was a visit to the Saikotei, a building which used to house a large traditional restaurant. The place was a high-class kind of joint to wine and dine in Japanese style and was frequented by dignitaries for a century or so… during which time they offered their philosophical prose in Japanese calligraphy…

That prose now adorns the tops of the doorways, with thoughts ranging from:

“I will not lose my feeling of righteousness to anyone.”
– Japnese Army General

“That I exist here and now is the most amazing thing.”
– Japanese Prime Minister / Nobel Laureate

Quite a range of philosophies to consider over the years. Today the Saikotei it is open to visitors and events and will house artwork for an arts festival in Yamaguchi this summer.

We moved on to Nagoya, meeting with Eiji Watanabe, an amazingly cheeky artist with a playful spirit. Artists such as Eiji help reinforce my faith in art as a tool for doing something bigger than the individual. Some of his current work, which we saw on display at Kenji Taki Gallery in Nagoya, takes the images drawn by children and recreates them as solid, welded, metal three dimensional works.

Our hosts in Nagoya, Kouji and Takako Yamashita, were also a very interesting story, as they are building an artist residency in the middle of the city in a building they recently purchased.

Koji and Takako both live in the building, and are planning/building a workshop, rooftop garden, and terrace apartment rooms for visiting artists. There’s also a cafe on the bottom floor which is yet unused. My professor and I stayed a few nights here, as ‘test’ subjects 🙂 I am grateful for the hospitality of Koji and Takako, and really for the hospitality shown to us in general.

The University at Aichi and Edinburgh College of Art, having just signed an agreement for collaboration and exchange, will be working together to create some projects on Megijima for the Setouchi International Triennale (one of japan’s biggest arts festivals). As a part of the exchange, I will be working with a small island community this summer, producing an (agri)cultural study of the people and their connection with nature of the island. The Final Straw documentary will also be screening some sneak-previews near the end of the summer on the island — again, more on this in the next post.

During our visit to Aichi University of the Arts (in Nagoya), we met with the University President Koji Matsumura, and professors Yoko Terauchi and Naoyuki Terai. My tutor from Edinburgh, Ross McLean and I also had a small lecture at the University, with Ross speaking about the Art, Space & Nature program at Edinburgh, and me blabbering for far too long about my recent projects, and how everything comes down to this idea that Humans and Nature need to be more connected with nature and our sources of food.

Well, the last bit seemed to strike a chord with several students who I talked with afterwards. Hopefully some of these bright young minds can work with Suhee and I on the project this summer.

Perhaps the highlight of the visit was that President Matsumura gave us a rather amazing and enlightening lecture on the Horyuji Mural Paintings which are housed in a special museum building on the school’s campus. The original Horyuji paintings are 7th-centry secco-style paintings (dry fresco, I think?) which in an of themselves are a rarity in the world; after surviving to the modern day, they were burned by fire in the 1950s and were almost completely destroyed. The paintings at Aichi are reproductions which the University faculty and students spent 16 years re-creating using color plates of the originals. An amazing feat to bring these lost paintings back.

Natural Farming at an Art University

It’s small, and Professor Ishii Haruo warns me that it is ‘experimental’, but Aichi University of Art in Nagoya, Japan has a natural farm on campus. Professor Haruo, who teaches in the design department, initiated the natural farm several years ago as an experimental project, and today it is offered as a class each semester where students can enjoy time growing food, and using the interaction as a direct ecological study to have their art inspired by this connection with nature. Haruo san also runs a very active environmental study group which fuses art and ecology.

Hearing about what Haruo san was doing, as well as what Isao Suizu (Aichi environmental design professor) is coordinating on Megijima, fills me with new energy. The human-nature connection has become a central point in my study and work over the past few years and is the theme I will be working with this summer during the residency period in Japan… more details on that later.

For now, I am back to Seoul and putting all the pieces together to prepare The Final Straw. Watch for interviews coming online soon as we continue to transcribe, translate, and edit this material!