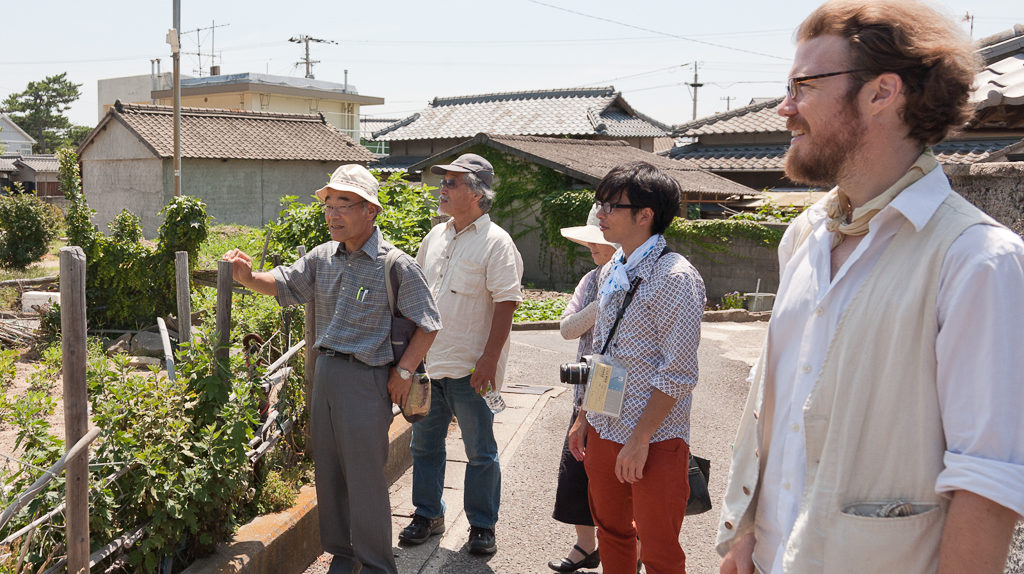 When I think about what we’ve done over the past month here in Megijima, I am reminded of Bill Murray making a commercial for Suntory Japanese whiskey… if he had to do it for one month straight.

After a month or so of Lost in Translation moments — and with much help from Professor Suizu and his MFA students from Aichi University of the Arts, as well as a great cast of volunteers from Setouchi / Team Koebi — the [HUMAN:NATURE] team successfully premiered our interactive documentary and held a symposium with three visiting farmers from around Japan.

It was stretch of long and tiring days leading up to the exhibition, one room buzzing with the sights and sounds of thirty local stories being sorted, cut, and transcribed, and another room a soup of English translation, program code, and the final edits.

Come show day, we wanted to give the visiting farmers a taste of the island, so Ryushi and I guided them on a walking tour of Megijima’s farmland.

After the walk, we headed for a special lunch at Kishu, a restaurant right in the middle of the main patch of Megijima’s farmland, featuring local fish and produce.

The afternoon took us to MEGI House, a project of the architecture program at Aichi University of the Arts which mixes traditional Japanese architecture with modern design twists. We were really delighted to see so many familiar faces from the community, gathered for the event as we unveiled the digital interactive artwork and had them give it a try.

On this particular day though, the unveiling was really just the icing… our cake was triple-layer, consisting of dynamic talks from farmers Mr. Matsuzawa, Mr. Kohno, and Mr. Okitsu.

After a month of work, and after the dust has cleared from the opening festivities and lecture event, we are left with thirty stories from individuals on the island. Most of our interviewees are blessed with several decades of life experience, and all of them are speaking of their connection with a natural place on the island.

It’s part community mapping, part research, part art, and in the end, it’s an interactive documentary of the relationships between people, family, nature, and the places we inhabit.

And hopefully we’ve maintained something in the translations…

One Reply to “Farmers, Artists, and… Bill Murray? The Show Opening in Megijima”