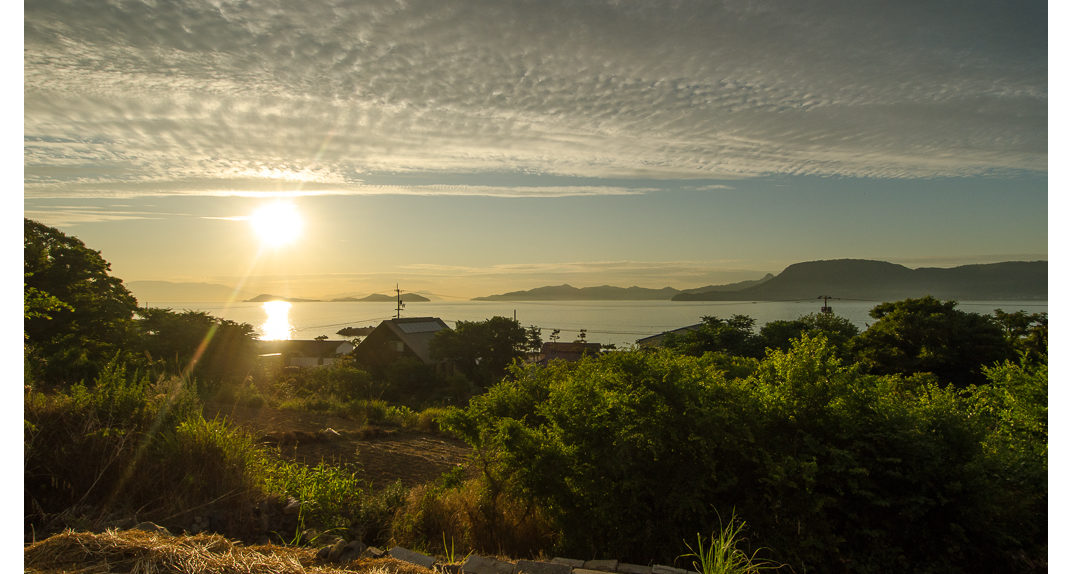 Week #2 here in Megijima, Japan, and while we’re still getting set up for our first interviews, it’s been an eventful week. The sun gets up pretty early here, around about 4:30am, and against my previous sleep schedule, I abide more or less by the sun’s command, “OUT OF BED LAZY AMERICAN, THIS IS THE *$#*%&@ LAND OF THE RISING SUN!”

Okay! Okay! I’m up already! Thank you Helios, and the Japanese Amaterasu.

Actually, this early kick in the butt coincides with the need to take geo-tagged landscape photographs of as much of this island as possible over the next month. So my morning schedule has been to get up before the heat sets in, half of the days taking photos, the other half running the length of the island — not much of a feat, it’s a small island. By 7am or so, that’s all finished and it’s time for some homemade yogurt, compliments of Professor Suizu, and to work planning, researching, or cleaning this big, dusty place up.

On Wednesday, Kei Toh helped translate the interview questions which we’ll be asking the islanders here, and we took a half-day shopping trip in the ‘big city’ of Takamatsu in search of some basic materials. In Takamatsu, we found a LOFT, and Tokyu Hands, two stores which in Osaka or Tokyo would sprawl over several floors of a large building, here, they covered a modest half-floor each.

We would rather have shopped at some more local stores, but the massive 2.7km long shopping street here — one of the largest in Japan — seemed to be suffering a shortage of tenants in the area of home goods.

I also welcomed Suhee to Japan on Wednesday, we talked around Megijima, and took a ferry to neighboring island, Ogijima for a look at the community, artworks, and nature.

Megijima is only 20 minutes from the city of Takamatsu, and Ogijima, 40 minutes out and far more isolated. On Megijima, the sound of the city occasionally mix with local wildlife, yet Ogijima is too far off to see or hear the city. I would guess that the distance might have something to do with the former being developed as a summer-home vacation spot, whereas Ogijima seems to have maintained much in the way of traditional architecture. But then, Megijima also hosts an artificial beach, more flat land, and has become a hot ‘summer tourism’ spot in its own right… carrying both good and bad results for the locals.

At any rate, Ogijima was a good, hot, hike through the small town, across the island and up through to the summit, sometimes through Northern-California-esque tree groves, sometimes through straight jungle. The island hosts much in the way of wild fruit trees, so we also treated ourselves to what a local called “bewa,” we think they tasted like apricots.

Come Saturday, we had a Skype chat with an animation artist who is just finishing up at RISD in the U.S. She was impressed by our project’s focus (human and nature connection) and we were likewise, impressed by her spirit and style. Hopefully we can help something to come of it in the near future. Our newest volunteer, Ryushi, also joined us on Saturday for orientation and to start translating a few bits, and by afternoon he was helping out as a Japanese television crew invaded the studio space with multiple cameras, lights and a bunch of cute, fuzzy, microphones. We indulged the Okayama-based program (夢みる金 バク) as best we could.

For dinner, Suhee and I joined the Megijima Tourism office head, Miss Yokoyama, at her home just down the street (note: everything is just down the street here). She prepared us a beautiful dinner of Kagawa style sweet fried rice, and after realizing that I had spent time in Scotland, insisted I have some whiskey and homemade cordials. I didn’t complain 🙂

The dinner discussion was a delightfully awkward dance of Japanese-meets-English: many hand signals, many funny faces, but best of all, a lot of laughter, warmth, and smiles. A nice cap to the first week.