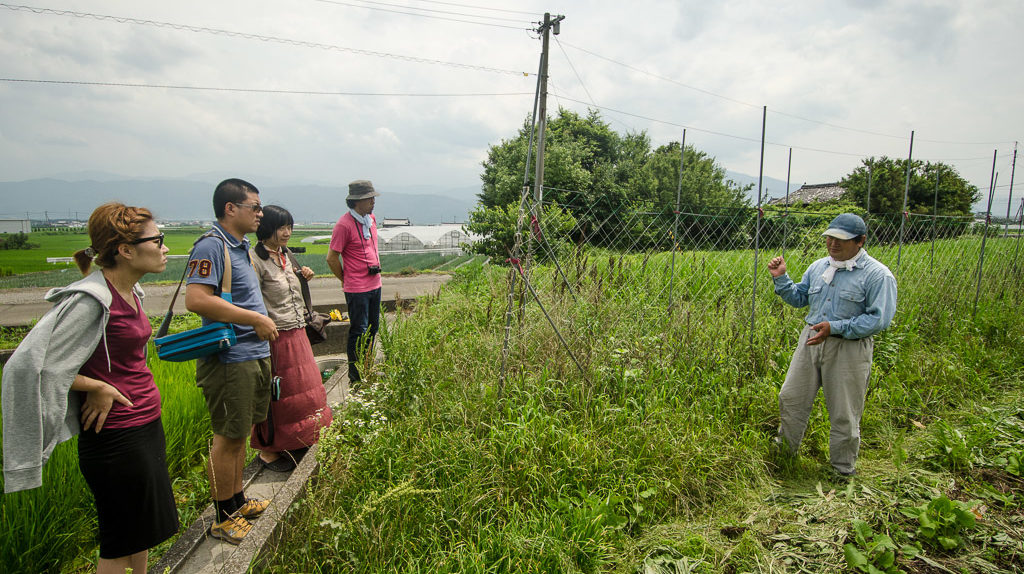 The [HUMAN:NATURE] team went on an ‘away’ mission yesterday. Seven people jumped into a car most that Americans would consider ‘small and cute,’ and off we rode to Awa, Tokushima with Professor Suizu.

Our destination was Mr. Okitsu’s natural farm. During this past spring, I had spent a week working on his farm (see post: The Maddening Simplicity of Good Food) and learning about his farming and life philosophy. Okitsu happened to be hosting a lecture on this day, and fortunately all of us were able to learn a bit more about his viewpoint.

He doesn’t stick purely to ‘farming’ in his lectures, in fact, as most natural farmers, he believes that the act of farming is really just one way to express a core philosophy. So rather than talk about plants, soil, and weeds, the ‘theme’ for this month’s lecture was simply about ‘desire and fulfillment’ split into four categories as follows:

That’s a pretty general overview of the idea and perhaps my translations don’t really hit the point. Some of us had thought that the goal, going up these ‘levels’ of desire, is to have no desire, that this would be the ultimate state. Indeed it is, but at that point, you would essentially be dead. So, the realistic goal, I think, is to be floating around somewhere in the two middle levels 😉

We also took a nice little tour of Okitsu’s natural farm and… made plans for him to visit us on Megijima this weekend to take part in our [HUMAN:NATURE] symposium with two other farmers, Mr. Matsuzawa, and Mr. Kohno, from Aichi and Kagawa, respectively.

If you’re around, it will be a good kick off to our opening, here are the details:

The ferry service runs from Takamatsu, with the last ferry returning at 9pm.