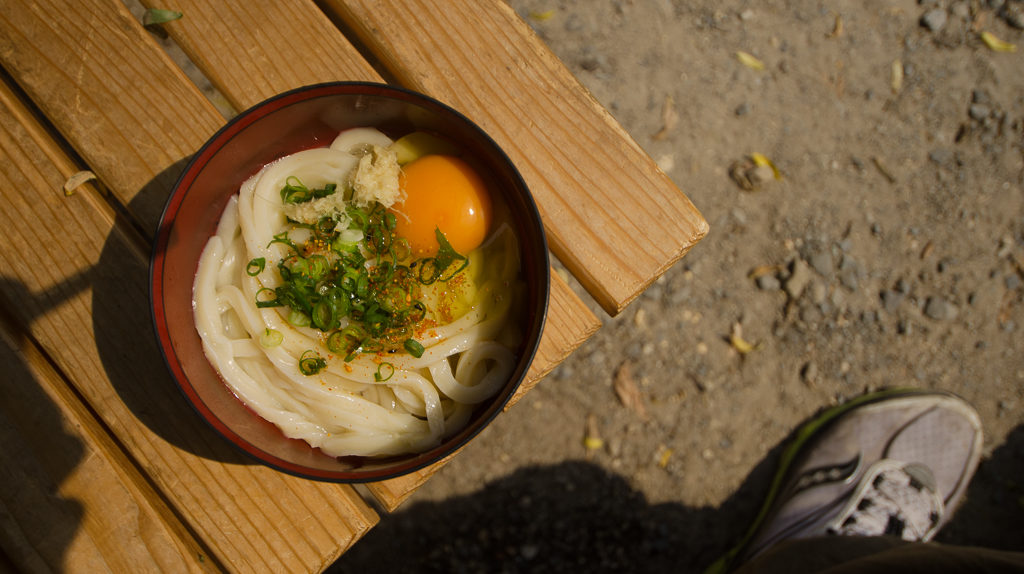 That’s Youji. Musician, rice farmer. He studied jazz some years back, living in the tightly packed alleys of a Tokyo neighborhood. At some point he and his wife, Naho (city girl who he met in one such tightly packed alley) moved to the countryside of Shikoku. For his wife, the slow pace took some adjustment after life in Tokyo, but for Youji, it was actually a homecoming, back to the rice farm where his family had worked the land for over 300 years.

It’s an ‘open kitchen’ so to speak, and they make one thing: udon, in small or large. This is the typical Japanese way… you do one thing, you do it your whole life, and you master it. If you haven’t yet seen the film “Jiro Dreams of Sushi,” its storyline follows this concept beautifully.

Not that you don’t have options in this strictly udon restaurant-in-a-closet, you do. Besides large (280 yen) or small (150 yen), you have hot or cold, and the option of adding an egg (20 yen) — just pick one up and crack it into your bowl after it’s served to you.

The inclusive list of toppings are: fresh ginger, spicy flakes, and sauce, all are mandatory if you want the full experience. I picked a small hot bowl with an egg. About $1.70 USD. Who says Japan has to be expensive?

Once you’ve added the toppings, you and the bowl head out to the parking lot, where you have a few options: under the single tree, or in the street. The shade of the tree seats about 5 people, after that you’re in the street where you’ll have to stand in it and eat.

Which doesn’t really seem to bother anyone as they slurp up their noodles with big grins on their faces, many of them having traveled from 2-3 hours away for the opportunity to fill their tummies with these noodles. Popular place for a tiny town.

Later this week I begin what will be a three month artist residency on the small island of Megijima. Suhee will also join me starting next week, as we work with the local population, using image, word, sound, and a bit of technology to explore the connections between humans and nature.