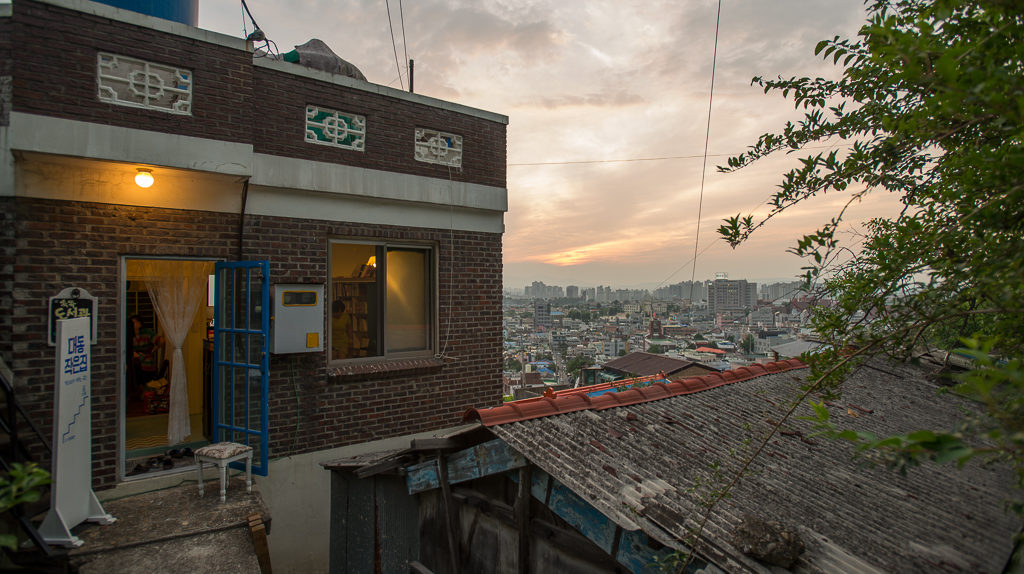 Upon arriving to Seoul this June, Suhee and I were concentrated on finishing the film editing by summer’s end, and with many thanks to our good friend Dr. Noah Park, we were able to work at the Space Noah co-working space; we also found a warm welcome at Open Contents Lab, a new no-fee co working space supported by the Circle Foundation and managed by our friends Yeji, SueHyun, and Rio.

With Seoul, however, also comes hours of commute time, and the hustle, bustle, and intensity of the big city. At an earlier stage in our project, the social life of the city was a blessing, but in these final stages of bringing this film project to completion, both Suhee and I pretty much wanted to be locked in a cave.

Well, not exactly a cave, but at least a place where we could sit and concentrate on the film with considerably less distraction.

A Residency at “Jageun Jip”

On the recommendation of our good friend (and huge supporter) Gwi Jung, Suhee and I were offered — and very happily accepted — a two month artist residency in Daejeon called “Jageun Jip.”

We will be here for July and August with the goal of finishing our story, film editing, and script translation work for the Final Straw.

Jageun Jip means “small house” in Korean, and it is just that; a very small house on a forested hillside overlooking the city of Daejeon. The house functions as a unique community library, and a newly opened live/work residency for writers.

Interestingly, Suhee lived in Daejeon for a decade when she was young, so she has many memories of the city. It’s not her ‘hometown’ so to speak, but there’s a very close connection to the place for her. Plus, she also apparently knows a really good place for tteokbokki (I’ll report back on that later).

The city of Daejeon itself is home to around 1.5 million people, set in a valley with an agricultural history, and today is known as the “Silicon Valley” of Korea. Sounds like familiar territory to me, too! New Sister City, San Jose? Daejeon is also home to a bullet train stop, a 15 minute walk from our small house.

The kind couple who run the residency (Booyoung and Enduk) are also running a much larger space in the center of the city called SanHo (that’s not short for San Jose, but it does make it easy to remember).

SanHo is a complex which houses five artist studios on the first floor, and an active guest house above it. These two seem really to be great champions of art, alternative life, and the creative forces in Daejeon, involving themselves in re-invigorating the city’s core with artwork, workshops, local craft markets, and a local money system.

It’s an exciting place to be and we are planning to make the walk down to the city every week to engage with the people in SanHo. Good people to be around, with so much good energy being put into their work!

For the most part, we are up on the hillside, trying our best to stick to a 6am — 10pm schedule punctuated with things like meditation, writing tasks, siesta, editing tasks, reading, Suhee baking, and me trying to cook Korean food.

As it is, we are working with a forest and hidden hillside gardens to our rear; an old working-class neighborhood with a maze of alleys, streets, shops, and homes around us; and an expansive view of the city spreading across the valley in front of us. If you know me, you know this is totally my kind of place, and so far it’s been conducive for good things.

Suhee and I look forward to each day of the next few months here. I’ll try to post some timely reports. I have been better at this lately, right?

Some photos from the first few days in Daejeon…