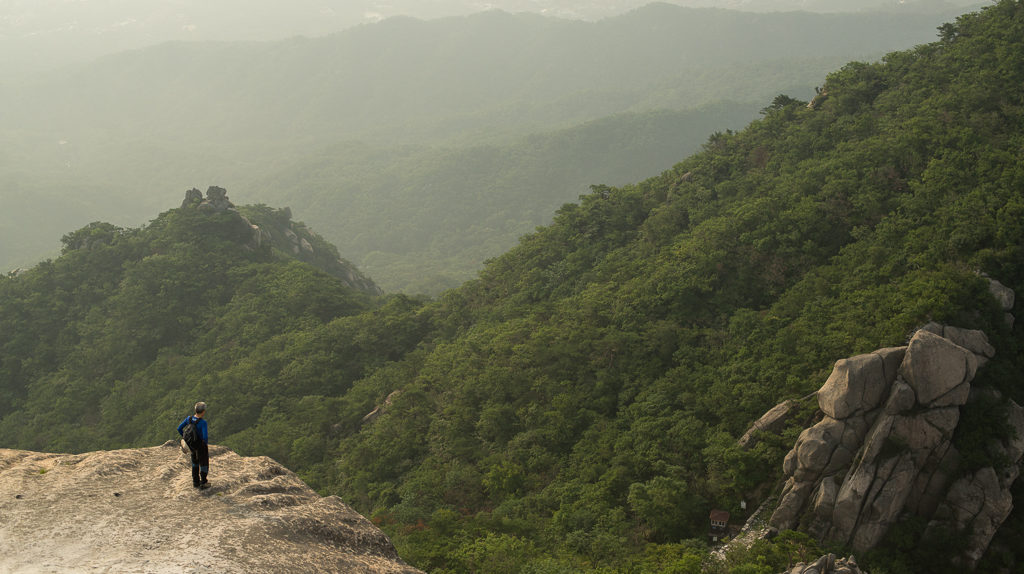 During our last full day in Seoul before traveling south to Daejeon for the next few months, we were treated to a morning hike up Bukhansan with Suhee’s father. The mountain is a popular attraction for locals and foreigners alike, being that it is the tallest mountain in Seoul city, and very easily accessible by both bus and subway, either of which will bring you pretty darned close to the foot of the mountain!

The mountain itself is notable for its sharply sloped granite sides which rise about 830m (2,700 ft) above sea level, and for the fact that it offers an easily accessible natural respite amid a giant 25 million person metropolis.

The disturbing magic trick on the day we hiked up was that you couldn’t see any signs of this metropolis. Suhee’s father reminded us that the city surrounded us in most directions and “On a clear day, you can see the entire city and Han River”.

Since I arrived in Seoul last month, I’ve almost forgotten what a clear day looks like — then again, Scotland might have particularly ruined my perception of what blue sky can look like.

Still, the air felt a bit better both within the cover of forest, and atop the mountain peak. The hike offered a good bit of exercise and peace away from the clogged arteries of one of the world’s largest human settlements.

I’ll add that Suhee’s father beat us both on the way up and on the way down. Now, I would say it was amazing to see a 70-year-old man scramble up and down granite cliffs… but he was so far ahead of us, I couldn’t see him most of the time. By the time we did catch up with him, he was sitting on top of the mountain peak in a meditative pose.

I did find a rock formation that kind of looked like him, though.

We’re off to Daejeon next, where Suhee and I will be artists in residence for two months at Jageun Jip, a beautiful looking little house + community library perched on a hillside. Here, we’ll expect to finish primary editing and soundtrack work on the Final Straw film, and also arrange the first screenings in Korea. I’ll let you know what things look like when we’ve settled in!