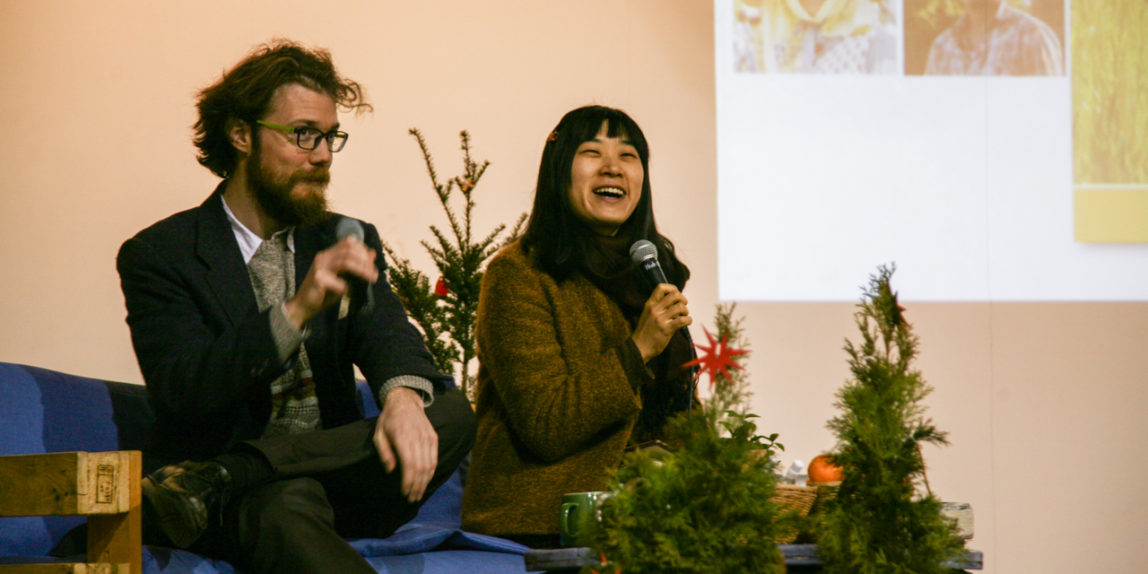 The year started off in the mountains of South Korea.

Generally it’s been cold here this year, but not quite as bad as the winter a few years past. That is, until we got out into the country side a bit. The image below was taken on a frosty -27c morning. Perhaps the one thing I have come to like most about these kind of mornings is growing an icicle beard. I know, a novelty. After leaving the farm, we helped out our friend Bomnoonbyul to do an impromptu filming of one of his performances. Bomnoonbyul is a multi-instrumentalist who appears in several places in the Final Straw soundtrack.

His specialties are wooden flutes (a few of them of Native American origin) and kalimba, also known as ‘thumb piano’.

A few of the concerts took place in the small town where we had filmed much of the scenes in Final Straw. As in many small towns here (and around the world), the people were amazingly warm and accommodating. We hopped from one community center to another, me giving a little introductory opening act, and Bomnoonbyul performing compositions with his assorted instruments.

After the performances, small foods and liquids always flowed, from instant coffee to beer and hard alcohol depending on the time of day and/or the inclinations of our hosts. It reminded me of the stories I’ve heard from Scottish wintertimes, when troupes of performers traveled from door to door, performing and partaking in food, drink, and general jollity.

There were some fun moments shared with both the tender and boisterous aged residents of these towns! Suhee and I also escaped the winter for a few brief moments in the greenhouse at Changgyeong Palace. Not as well traveled as the larger palaces around the city, the greenhouse and surrounding gardens and forest here are relatively peaceful, featuring trees that are both native to Korea, and those imported hundreds of years ago by one diplomat or another, some from the mountains of China, or the Mediterranean coast. We also took a few days to send out some photo cards and gift packets, some to our translators who helped with the film, and a few to friends and family. Most included a set of postcards from the filming, and a few hand-made tea coasters with bags of tea, courtesy of Suhee’s sewing factory (aka, sewing on the train during our commute).

We feel very fortunate to have some supportive friends who have helped us. Truly. We are always thankful for you. One of those friends, Ga Young, has been on a great adventure of her own, leaving her job at a fancy French restaurant and opening her own tiny venture.

She inspired us so much, we wrote a story about her which is posted up on the SocieCity website at the moment (although, shhh… it’s still in beta testing!)

For us, we decided to take some time this Winter, to focus and ground ourselves and to detach from what can often be an overwhelmingly ‘connected’ life.

Which, in and of itself is a really ironic statement, isn’t it?

The more we become ‘connected’ to things like social media, our phones, our digital calendars, and our extremely information-dense society, the more we seem to become ‘disconnected’ from the reality of life on this earth. I think that statement may ring true to some of you as well.

So, we decided to go cold turkey and try 10 days without any of these things. No phones, no internet, no reading, no talking, no writing. Just being present as a life form on this earth.

Of course, we didn’t just run into the forest and do this, but we took part in a Vipassana meditation course here in Korea. I’ll save the details of it for perhaps another time, or a talk in person, but this course, which is based on Buddha’s original teachings — as far as we know, at least, he’s quite an old guy, isn’t he — and it was a very difficult yet also very rewarding experience for both of us. Suhee, actually, has done it three times now.

Not wanting to jump directly back into the rush of 20 million people in Seoul’s metropolis after such a socially isolated experience, we went from the meditation course to Jeju Island, to visit with Suhee’s good friend ChaKuri. ChaKuri lives in the middle of a mandarin orange field.

Special for me, but not quite a special thing in Jeju I think, as one of their main exports is hallabong oranges. I think all of them essentially live in an orange orchard.

In Jeju, there is also a bit of an ongoing struggle which would make most Americans slightly uncomfortable. The Jeju Naval base, which is mainly a project of the United States is currently under construction — directly on top of a UNESCO Biosphere Conservation Area.

Sadly, although the local government and 97 percent of residents were against it, this island — which is also known as “Peace Island” — will be the home to some destroyers and warships soon enough. Such is life in our world today, isn’t it?

We met with some individuals from the Jeju Peace Movement however, and although they have essentially lost a battle, their voices of peace have not been lost. This was both heart breaking and heart warming to see.

Below are the remnants of the struggle; barbed wire, and a tattered protest flag, still flying in front of the construction.

Back in Seoul, and back into our daily working schedule (film editing and planning mainly at this point) we met with our Animator Heeyoung Park to talk over her final edits to an animation she has now been working for over a year to complete.

Some of you will know that there is this idea of an ‘animation’ floating around as part of the Final Straw film. Indeed. Since the Summer of 2013, we have followed what I could only describe as an ‘organic’ path with Heeyoung towards creating a short animation that spoke both to the film, and to her own personal vision, heart, and feeling.

As a part of creating the animation, Heeyoung spent several months living with us in Japan and the UK, as well as on a natural farm in California so that she could immerse herself deeply in what this was all about. Now, mind you this is only a few minute animation we are talking about… but it takes a lot of in-depth work to do such a job and do it right, and we think Heeyoung certainly has done it right.

Well, you can see for yourself soon enough, but for now here’s Heeyoung enjoying nature, and one of her animation ideas related to the film… Before Suhee and I departed to Daejeon, where we have spent the past month, we were invited to present at the EDUfarm conference in Seoul. Well, actually I think Suhee was invited and they kindly let me sit with her and say some things in English to make the crowd laugh 😉

This substantial conference brought together teachers, authors, artists, activists, and small scale farmers and farming organizations to create cross-discipline open dialogues, mainly aimed at integrating ecology and agriculture into Korea’s education system. Of course, it’s a goal we believe very deeply in, too, and we were happy to show a short clip from the Final Straw, and to connect with such a forward-thinking and dedicated group of people. The last thing before we left Seoul, was to help our friend Naju. She has been a big supporter of the project, and if you remember the summer time ‘Illegal Flower Market’ which we hosted occasionally over the past few years, Naju was the person who helped facilitate it, allowing us to use the street in front of her shop on a popular street in Seoul.

Naju creates hand made jewelery, and in her preparation for setting up a new shop, wanted to have some photographs taken of her jewelery both on standard white backdrops, as well as on models. I have to confess, I got the more fun of the two jobs, working with the models… the more I look at her work, the more amazed I am at the time and creative energy her job entails. Here are a few of the image from the photo shoot. It’s been almost two weeks now in Daejeon, where I’ve been focused on working with the film’s soundtrack, and Suhee has been writing, translating, baking, and arranging our schedule for the remainder of our time in Korea.

When we arrived here, we found this… from Dajeon’s monthly culture magazine. Suhee says it’s a well written article, I’m still learning to read the title and all I know is that they used a photo of me dabbing tissue on Suhee’s eye. Charming. And a bit strange looking. We’ve had our eyes focused on our work lately but there are a few other exiting things, I just can’t yet report on them until we have things confirmed.

I will say that the film will have some publicly available screenings by summer time, that later in the summer there will be some activity in Japan with various artworks — keep an eye on the calendar for those details — and that my brother Sean is getting married, and I’m dutifully (and quite happily) going to serve as the officiant.

And that’s about all I know. For us, we’re continuing to work hard. We take our afternoon walks around the neighborhood, coffee in hand, and for the most part I notice that the contents of the cup stay warmer a bit longer.

That’s a sign that Winter is coming to a close.

I’ll leave you with this one… the man down the street a ways sits down at the beginning of each season (solar term) and paints new calligraphy to celebrate.

He pastes them on the front gate to his home. Here’s the one for Spring — as Spring began a few days ago according to the solar calendar…

“Spring is coming. Shall it bring excellent luck and happiness.”