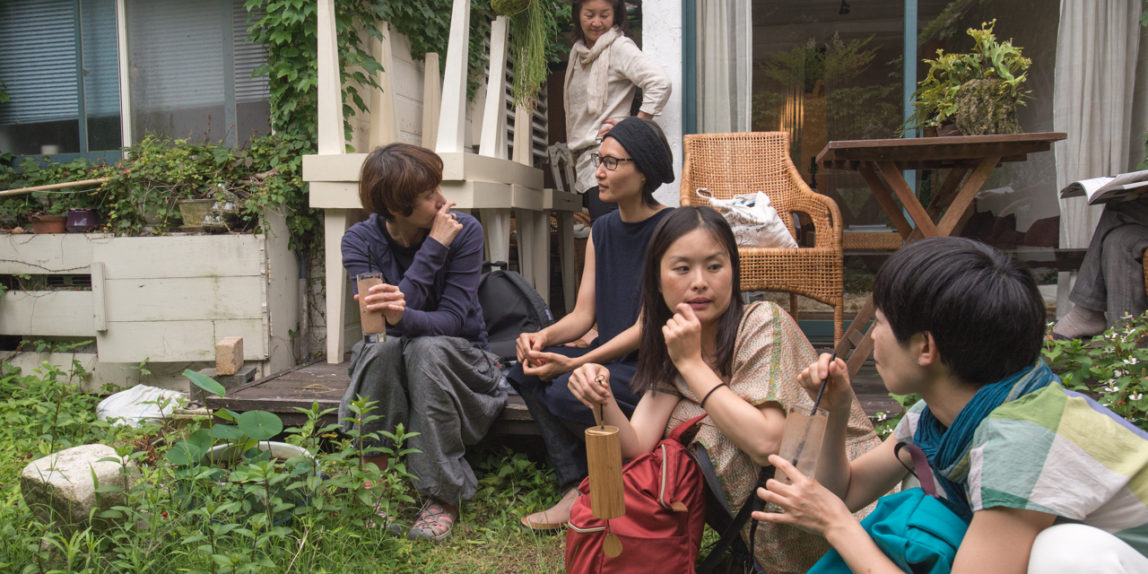 This past weekend Suhee and I were in Kyoto. We got off the train early, and took a long few hours walk to our destination, giving ourselves time to slow things down. Just walking. Looking. Feeling. Experiencing this city. Slow pace.

The destination was a concert by Alicia Bay Laurel, who some may know as the author a book called “Living On The Earth” which was published in 1970, about a decade before I was born.

The concert was touching, a beautiful romp through cheer, a wee dash of sorrow, and a great helping of hope. Great atmosphere, and just a really good time with good people. We were there as photographers for the venue, which is called Cacao Magic. Oooh. Yeah. It is as good as it sounds.

The owner sent us home with a bag of hand made raw cacao chocolate bars. Each one was wrapped in an illustration by Alicia Bay Laurel. How special this was for us. After a deeply engaging day and evening, we could indulge in a bit of bitter sweet chocolate.

Resisting the temptation to open the bag of chocolates on the train ride home, we waited until we were back in Osaka and made an event of it. Slowly we unwrapped one of the bars, cracked a small piece off each, and enjoyed the experience of tasting it.

I remember Alicia saying at the concert, how different an experience it was from eating a Hershey’s chocolate bar. She’s so right. You can taste the bean. It wasn’t a sweet, soft, velvety taste that you can count on to be exactly the same as it has always been. That kind of standard is only possible through industry. Scale. Mediocrity.

No no. This wasn’t anywhere near that. This chocolate had character.

It was something made with care and craft, and the taste was unique. It’s not that it was the ‘best chocolate in the world’ or some other sensational label. Best does not exist. Only truth does. This was true chocolate. The performance that night too, was was true performance.

What made these things true?

For me, it was an honest experience of intimacy and relationship. It was the experience of having something directly given and received from person to person. In the case of the chocolate, it was a thing crafted by hands and then given to another person with those same hands. The concert similarly, was a small affair where audience and performer could connect in earnest.

How many products can we say we consume today, where we have a relationship with the person producing it? I guess ‘consume’ itself, is a problematic word, a one-way transaction of taking without giving. Several years ago I couldn’t say that there were many such commercial relationships in my own life where I wasn’t a straight consumer. Perhaps not any at all, as I hopped from mall to mall.

What does it matter, anyway?

Aren’t ‘small’ and ‘handcrafted’ just things for the wealthy?

Ah yes. Perhaps that is what they’d love most for you to believe.

I hope that the things Suhee and I engage in, our art making, our writing, our community engagement, will help to put a few good cracks in the glass, behind which that rumor is kept that it is impossible for all people to afford good quality, handmade things, and good quality, organic and sustainable food.

Not only is it possible, it’s also quite a bit more beneficial. Instead of gorging on a whole mass produced chocolate bar — yeah, I’ve done that too — a few small bites of a well made chocolate which is produced ethically, which supports local jobs, which supports bean growers, which is better for the environment.

True experiences are everyone’s for the having. They are exercises in slowing down, in cultivating relationships, in appreciating this life. They also take a lot of practice for us, who were trained otherwise.

The effort though, is well worth it!