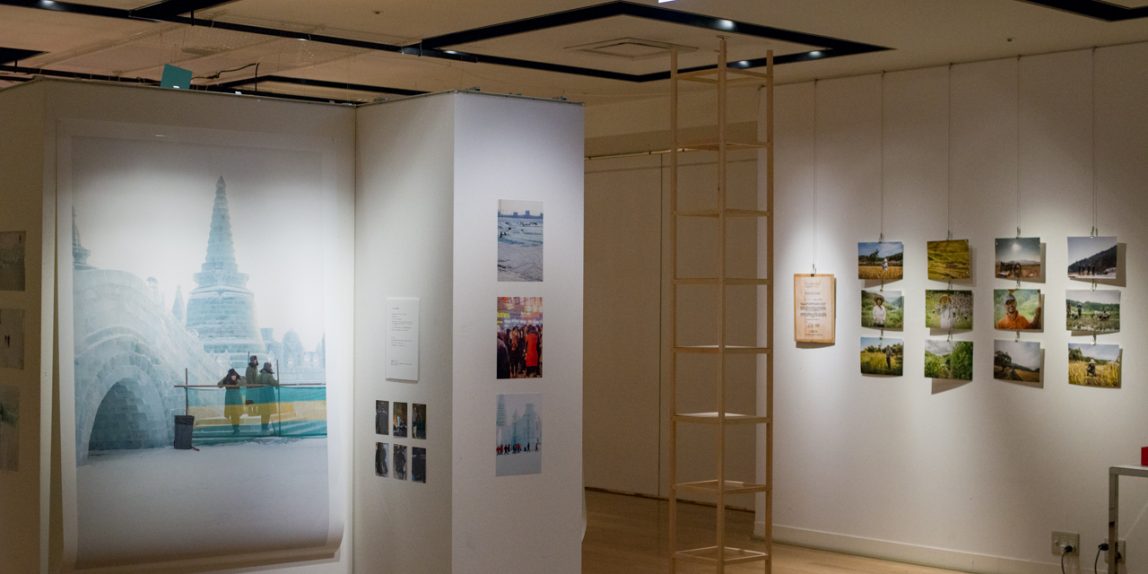 Installing work today for the Asia Book Market, which runs from July 24 – 29, 2019 at Hankyu Umeda, one of Japan’s largest marketplaces. The place itself has an interesting history for us…

The Hankyu Umeda store is one of the first places I filmed b-roll footage (illegally) to help highlight consumerism in Japan’s major cities. That b-roll eventually found its way into Final Straw: Food, Earth, Happiness — in several places. Having the chance to legally hang work inside here is a bit chilling. Walking through to doors of the store on the install day brought back memories of filming scenes here several years ago.

Actually, as I left after installing everything, I re-traced my path through the crazy food market, the centerpiece of one of the film’s musical sequences. It hasn’t changed substantially over these past several years.

The machine is still humming away.

Now of course, I should let you in on a secret, that Hankyu is also the operator of one of my favorite train lines in Japan. There’s a rumor around here that it was David Bowie’s favorite train as well. He had good taste. The Hankyu train, which travels primarily between Kyoto, Osaka, and Kobe, is a model example of punctual, comfortable, yet inexpensive regional rail, subsidized by the train operator’s real estate holdings nearby the stations. But that’s an urban developent story for another time.

The event at Hankyu features arts-oriented bookmakers, small publishers, and artists, and is organized by a local art and culture magazine called IN/SECTS, who are very supportive of the small and local. Importantly, IN/SECTS are also very proactive in building relationships with artists in other Asian countries. We’re very happy to be a part of what they are doing.

So what did we choose to display here? That’s the fun part.

Suhee and I are displaying images, along with (delightfully anti-capitalist) quotes, both of which are sprinkled around the entire exhibit area. The quotes are culled from our years of interviewing farmers around East Asia, and they tie in directly with the fact that the exhibition is a few floors above one of the country’s largest supermarkets…

To reveal beauty is synonymous with revealing truth, and so health includes beauty. However, there is no beauty inside a supermarket. You will not find it.

As is normal with our exhibition materials, it’s mostly up-cycled. The quotes are mounted with lacquer onto pieces of wood from a nearby demolished house.

On the 27th, we’ll be giving a short talk, and Suhee a workshop about making herb teas with locally collected plants. Besides the talk and workshop, the overall event itself is well worth checking out if you’re in Osaka.