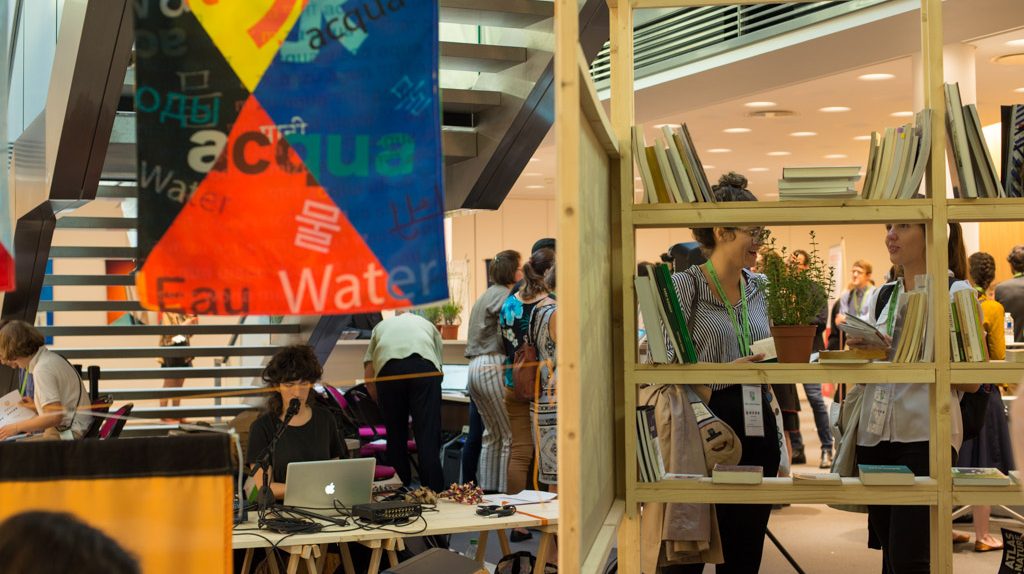 Just back from Paris, where I was fortune to be one of three curators (along with Carmen Bouyer and Stéphane Verlet-Bottéro) of an exhibition called the Forum for Radical Imagination on Environmental Knowledge (FRIEK). Together the three of us designed, built, and curated an arts platform to augment the Nature of Cities Summit, a global conference of ecologists, urban planners, and others from academic and government roles. A total of 371 attendees from 52 different countries came to Sorbonne University in Paris, to figure out how to build cities that work together with nature rather than against it.

The role of the arts exhibitions and performances was to help challenge the framework of established knowledge, allowing new ideas for sustaining cities to be generated in collaboration between disciplines and species. The art installation included several components related to our documentary Final Straw: Food, Earth, Happiness, including film clips, a tree meditation workshop by Emilio Fantin, and a bookshelf highlighting knowledge from Masanobu Fukuoka, Larry Korn, Yoshikazu Kawaguchi, and others.

At the beginning of this year, we released the short film “Food, Earth, Happiness,” and it has been selected for two festivals recently. Strano Film Festival in Italy has picked the film as one of 29 films to be screened at their compelling festival. Their tagline, “A FESTIVAL OF THE LAND,” is not just lip service, but a call to action for a region to re-connect their way of living again with the land. As well, the film was selected by the International Nature Film Festival, which takes place in Gödöllő, and will screen films in 30 other locations in Hungary.

Here in Japan, Suhee and I been invited to give a talk and exhibition of images from the film the ASIA BOOK MARKET which takes place in the center of Osaka’s main commercial district at the Hankyu Department Store. This store was the location for a few scenes in our film (the scenes that poke fun as consumerism). Thanks to IN/SECTS Magazine, we have the opportunity to do a bit more of this, from the belly of the beast so to speak. The events will take place from July 24-29 at Hankyu Umeda, located directly in the central Osaka train station. As well, I’ll have a talk in Kyoto for the Kyoto Value series, hosted by Chisai Fujita, more on that when I know the details.

The idea that we can develop and use our personal talents (and we all have personal talents) to make the world around us a better, more interesting, more fun, more ecologically and socially well place, is an idea that has become important to me. Sometimes we forget that we have the choice each day, to share our good energy, curiosity, and creativity with the world around us. Sometimes we feel we don’t have time. Sometimes we feel it’s economically unwise. Sometimes we don’t even realize the use of sharing our gifts at all. But whether it’s a drawing, an offer to share the things we love, or just a smile, that effort tends to build well-being for ourselves, and the people we engage with. Often it does so in ways we could never calculate. A small act can ripple effects throughout the world.

The owner of AIR is a good friend who has helped us innumerable times here in Osaka, and this map is just one of the little ways to give back something. Plus, I just really enjoy working with maps, so a few days of planning and drawing isn’t such a burden. It’s in pieces now, but when put together, the map will help guide visitors of AIR (and The Branch) to the useful things in the neighborhood, from sushi restaurants and shopping streets, to art galleries and parks.